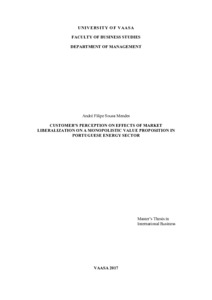 Since 2006, a change occurred in Portugal among energy providers due to the complete transition from a natural monopoly to a free market. The timeliness of the topic justifies a scientific analysis of the change in Energias de Portugal monopolistic strategy, company created in 1976 as result of the merger of key companies operating in the National Electricity System (SEN) and which had been nationalized in the previous years. This organization now operates in a market that is difficult to predict, having as main characteristic the turbulence caused by competition.
Using value proposition canvas main concepts and adopting customers’ perception, this thesis will seek to identify the changes in one of the core departments of EDP affected by this change, sales. Whereas, this study has analysed a single company, the data for this research draw on eight qualitative semi-structured interviews with families, which are clients of company in study and information available online in the direction of obtaining the information that answers the topic of this thesis.
After analysing value proposition map and customer segment it was confirmed an existence of relationship or fit, where a company manages to satisfy or answers most of customers’ segment sub-division’s needs. After profound investigation, it was possible to confirm that the new requirements of customers forced EDP to change its value proposition configuration in order to be able to survive on this new competitive free market. One of the interesting key findings was that economic values, such as price, were not considered as a major influential factor by the customers when choosing energy supplier, but brand heritage values were perceived as more meaningful.