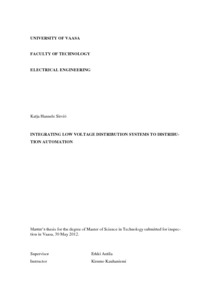 For a start DA is reviewed by generally used functions and by technologies. The review includes the data and the information systems and in addition the communication net-works are studied generally. Thereafter the main elements of LV distribution networks are presented and their evolution visions are introduced. The main elements comprises of the distribution network, distributed generation, smart energy metering, electric vehicles and energy storages.

The approach to the integration is the evolution of LV distribution networks, so four main evolution phases are introduced; traditional, boom of distributed generation, mi-crogrid and intelligent microgrid. The evolution phases bases on general research publi-cations and visions of Smart Grids. Management architectures for the networks are pre-sented. Also requirements for communication are evaluated by studying the number of nodes, capacity requirements for transferred data types and fault and event frequencies.

In order to define a proposal for integrating LV distribution networks to DA, the man-agement architectures and the studied requirements are compared to produce functions for DA. As a result, the proposal is presented based on the studied architectures and re-quirements. In addition considerable issues are introduced relating to the functions in devices or sub-systems, which are needed for DA applications. This thesis indicates the need for further studies, such as: Which are the desired DA functions to be extended to LV distribution networks? Which device or system should offer the desired functions? How well the potential protocols using some media type serves the functions?