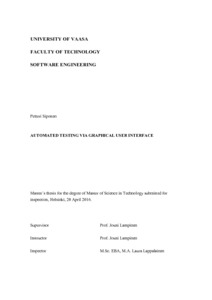 The subject of the thesis is automated testing via graphical user interface (GUI) when testing Android application by using black-box method. The scope of the thesis is limited to GUI testing techniques using black-box method without using the source code. Also other GUI testing techniques and proposed approaches will be studied especially in the field of mobile testing. The objective for this study is to find solution for making the maintenance of test script, and test automation runs more efficient. Other objective is to find best practices for test automation via GUI.

The outcome of this study was the found improvement for testing via graphical user interface in black-box environment. Using Visual GUI Testing method gives efficiency in testing via GUI compared to the initial situation where Record and Replay technique was initially used. Also the found white-box methods are giving considerable best practices for improving test automation via GUI e.g. using GUI ripping for modelling the GUI and generating automatically test cases and test scripts. The future studies could focus on how the pattern recognition and machine learning could help GUI testing in the field of black-box techniques. Other future study aspects could focus on how the GUI changes could be informed to the test automation tool to learn and gain knowledge of the changes. Also the implementation of Visual GUI Testing and GUI Ripping should be studied more for making a robust method for GUI testing.