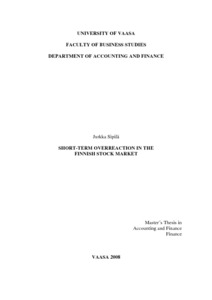 The purpose of the thesis is to find if there is evidence of the directional effect of a short-term overreaction hypothesis in the Finnish stock market. If the effect is found, it is assumed to disappear in a study window of five days as implication of the market efficiency.

Data consist of returns of stocks traded in the Large Cap and Mid Cap lists of Helsinki Stock Exchange OMX during years 2002 - 2007. The method is to separate the stocks, with daily return of a ±10 % or over to porfolios of winners and losers and study the price reactions in the first day and in the days 2, 3, 4 and 5 after the initial return of ±10 % or over.

The result of the study is, that there is a difference in the behavior of a prior winner portfolio in contrast to a prior loser portfolio: a prior losers become winners in the first day after the initial return and vice versa. This is similar with the overreaction hypothesis. The average return of a day 1 after the -10 % or more return is 1,2 %. The average return of a day 1 after the +10 % return is - 0,5 %. The difference is 1,7 %. Approximately the same difference is found between the losers and winners if the data is smoothed by rejecting 10 pieces of the most extreme findings of both portfolios. During the days 2, 3 ,4 and 5 there cannot be seen a pattern like this in the returns of either loser of winner portfolios. That´s why there cannot be formed a trading strategy based on the results of the study.