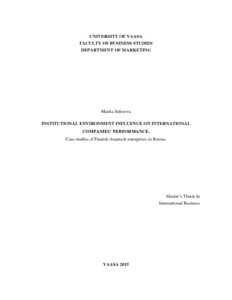 Purpose – There was the gap, revealed in the literature, in the institutional environment analysis of the Russian market and its impact on the Finnish companies` performance within the cleantech industry. The main purpose of the research was to describe and explore the concept of institutional theory with its adaption to the Russian market and analyze the impact of the environment on the Finnish cleantech companies, presented in Russia.

Design/methodology/approach – Adbuctive approach was chosen for the study, which permitted to create conceptual model on the basis of literature review as well as further modification of it after the obtained results analysis. Data was collected by the qualitative method with multiple case studies strategy application.

Research limitations/implications – The research is limited conceptually, methodologically and empirically. The first limitation relates to the chosen theory. The second one limits the study by the chosen qualitative method, while the third limit deals with the multi-case studies strategy and analysis of four companies.

Value of the research – Analysis of the Russian institutions and main constraints of the market adds value to the existed literature, related to the Russian market as well as provides useful information for Finnish cleantech companies, interested in the Russian market.