AN IMPACT OF NATIONAL CULTURAL CHARACTERISTICS ON PUBLIC MANAGEMENT IN THE RUSSIAN FEDERATION. Attempts to modernize the Public Sector 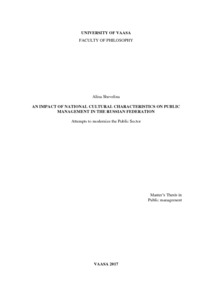 One of the most important tasks of public administration is to improve the functioning of executive authorities. The increase of efficiency and effectiveness of public administration depends on a rational choice of approaches and methods made by professional public managers in order to create right conditions for successful and effective implementation of strategical changes in public services sector.

Administrative reform implements changes to public administration system through modernizing management processes and structural characteristics of the state and political institutions as well by means of modifying the nature of relations between government and civil society in general. Crucial changes in the field of administrative reform should take into account many parameters that directly or indirectly affect the process of functioning of state bodies and relations within all units involved into the reformation. Cultural, historical, national and other characteristics are integral components in any decision-making process related to public administration field. These components should be considered when analysing strategic directions from the perspective of both government as a supplier of public services and civil society as the service consumer.

The research methods that have been used in the paper is qualitative. Descriptive-interpretive qualitative method is selected as the research method with the view to demonstrate how the historical and cultural national characteristics could make a crucial impact to the ongoing processes of transformation of the state administrative system and integration of New Public Management reforms in the Russian Federation. The data for the research was gathered from various sources such as history literature, state regulations, statistical figures from the official National Funds of the Russian Federation and others.

The main part the paper evaluates the background of large-scale transformations of the Russian administrative system since the second half of the 20th century till the present time. It also consolidates the final methods the modern government address when trying to stabilize the administrative management processes. Furthermore, the research describes which factors have influenced the formation of the modern administrative apparatus and how the civil society perceives the development of the administrative reform starting from the late 1990s when the Government adopted the course to democratization and market economy.

In conclusion, no positive result can be achieved when the process of change builds upon a forced and chaotic manner, furthermore when the used resources do not meet the requirements of estimate outcomes. The process of change should be gradual and sequential, as well as be able to conform to the technical, material, temporal and cultural specifics.