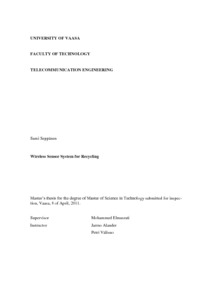 The motivation of this thesis was to research and design a prototype model of a wireless sensor network application, to be used as an automated detection infrastructure in recycling environment. The initial idea was to measure the level of the surface in a recycling container and transmit the information through a wireless communication system. The prototype is an initial step for recycling companies for building an automated detection network.

Background of the research strongly supports the accomplished prototype. Study includes description of wireless environment with its problems and challenges. It proceeds with consideration of suitable wireless standards and considers most convenient sensor methods for recycling environment. Eventually document presents the prototype combining the studied entities.