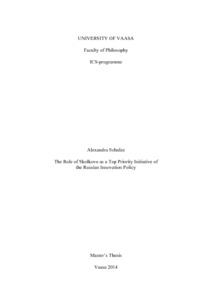 In the face of the ever growing global technological competition and increasing dependency on exports of natural resources, the government of the Russian Federation has recently declared knowledge-driven growth as its key policy objective. Under the Presidency of Dmitry Medvedev economic modernization and innovative development became top priorities of Russia’s political agenda. Thanks to the enthusiasm and personal engagement of Medvedev, a number of strategic initiatives, mainly aimed at overcoming the technological inferiority of Russia, were implemented. The Skolkovo Innovation Centre is one of the most significant of them. It is a technology hub and a research complex being built outside Moscow, often referred to as Russian Silicon Valley.

The aim of this research is to analyse the complex of strategic objectives of the newly created Centre, its role in the Russian innovation policy and its current, as well as potential impact on Russia’s overall innovative performance and global competitiveness. The analysis is based on the theoretical framework of national systems of innovation and is complemented by the innovation communication approach, underlining the key role of communication in success of an innovative ecosystem. The study shows that Skolkovo can be considered as one of the most successful innovation communication projects in modern Russia. Skolkovo has managed to draw attention to the numerous problems related to Russia’s technological backwardness and initiated a public discussion about the imperative of the country’s modernization through innovation-driven model of development. However, it is argued that the project has inherited structural disbalances and path dependencies of the Russian innovation system, which the country owes to the Soviet past and its leadership culture. Therefore, unless the Russian government improves the general investment climate, promotes the rule of law, eradicates corruption and fosters fare business competition, Skolkovo risks to be seen as a pure image promotion governmental endeavour rather than a powerful agent of change to boost Russia’s modernization.