An empirical study: How female top managers in Finland has succeeded to break the Glass Ceiling? 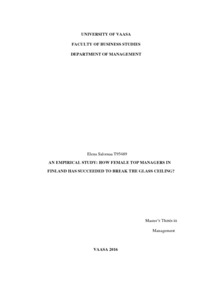 Gender equality in corporation world is more topical theme today than ever, since we are living in times of transition concerning age groups and societies. Even though there have been major changes regarding stereotypical gender roles and gender balance in labor markets, gender diversity rarely occurs in a board level of companies. Despite the fact that women are over represented in universities in Finland, they are still heavily underrepresented in companies’ boards. Reasons for the exclusion are multidimensional, and invisible gender related barriers have suggested being one of them. However, even though women representation rates in companies’ boards increase too slowly, some women manage to break the ceiling glass and get into the board level each year. What are the critical factors that combine these ladies and help women get on the top?

This study examined relevant factors of breaking the glass ceiling. It focused on revealing factors that may help women to break the glass ceiling and get into board rooms. The theme has not received much attention among scholars in Finland, since majority of the research has focused on searching implications and reasons for the phenomenon. Consequently, this research was important to conduct, since it provides new knowledge of the glass ceiling phenomenon and offers fresh perspective to the theme.

The research was conducted by interviewing four female top managers who have created successful careers in the Finnish corporate world. The interviews were conducted as a compilation of semi structured interview and unstructured interview. The collected data was analyzed by using a thematic analysis method. Results of the study indicate that social support and own attitude has a critical role regarding breaking the ceiling glass. Social support received from a spouse, family and different networks, affects positively to one’s own attitude. Own attitude is consisted of work orientation, courage and active networking. These themes together had a major effect to the participant’s career development, as they enabled the participants’ career progression in practice. Thus, the revealed themes helped the managers cross the gender based barriers that form the glass ceiling in women’s career.