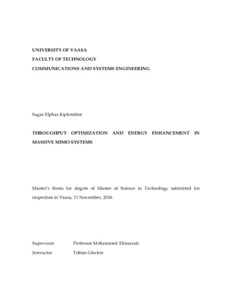 For the last few decades mobile technologies have undergone enormous transformation. Mobile broadband for cellular networks has been exponentially evolving with time and in order to meet the future expectation for this high demand newer and better technologies have to be invented. The enormous success of smart electronics such as tablets, smart phones and other hand held devices that use the Internet have generated a lot of Internet traffic therefore, diving LTE to its limit.
LTE (4G) which is a high speed wireless communication standard for mobile phones and data terminals is a significant upgrade of GSM and UMTS network technologies. The Technology has downlink peak rates of 300Mbits/s and Uplink peak rates of 75Mbits/s with transfer latency rate of less than 5ms. Power Consumption level for LTE is of significant concern as well as the energy consumption in cellular networks. To solve the limitations in LTE, one great candidate is 5G radio standard. 5G relies heavily on massive MIMO to achieve its targets.
This thesis looked into significance of Multi-antenna (Massive MIMO) at the BS as a solution for energy efficiency, increased data rates and the reduction of latency rates in wireless broadband communication. And the simulation results proved that Massive MIMO has better performance compared to conventional MIMO.