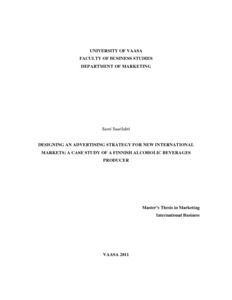 This explorative case study aims to identify and substantiate the most suitable international advertising strategy for a Finnish alcoholic beverages manufacturer, Pramia Ltd.

The theoretical part of the study begins with a definition of the components of an advertising strategy, followed by an exploration of eminent models widely referred to in advertising studies, such as the PCM, the ELM, and the Rossiter-Percy grid. In addition, cultural-legal aspects are examined, relative to the case company and its intended European target markets. Finally, branding is discussed. The exclusion B-to-B aspect and media strategy represent the most significant limitations of this study, along with geographically limiting to selected European countries.

This study identifies the case company’s core value of ecological responsibility as the key element upon which the international advertising message strategy should be build. In addition, the high quality of the products should be emphasized and their unique design exploited by allowing the bottle(s) a visible role in advertising executions. An indirect reference to the company’s geographical origins could also be made. The case company’s own idea of creating a targeted advertising campaign for hikers, huntsmen etc. owing to the products’ functional aspects such as durability and light weigh was refuted.