Corporate vision and its influence on motivation in R&D organization: Case study 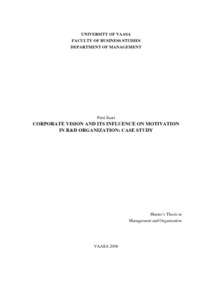 In the case company X it had been found in a working climate survey that the corporate vision had not been understood by the employees of the R&D organization although the personnel have relatively high work motivation levels. Previous studies have pointed out some special features in an R&D organization, the importance of learning and innovation in R&D organizations, what motivates and how to motivate R&D personnel, etc. However, these studies could not explain the previous contradiction that had been noticed in the case company.

This case study uses the qualitative method to answer questions that were left open by the quantitative survey study and to deepen and give a more detailed understanding of the mentioned contradiction. This study could be said to have an abductive research methodology approach, and the researcher had some leading theories ready to be tested during the research. Considering the research objectives, the most suitable research method to collect data was the general interview guide approach.

This study revealed that motivating R&D employees by a corporate vision is far-fetched. The motivation for R&D employees was coming from other substantially more important sources. On the other hand, there could be some connections between the corporate vision and motivation, that appear, e.g., in projects and organizational culture. In this study it was found that, if the corporation did not establish a R&D vision, then R&D employees practiced visionary leadership themselves to construct a realistic, believable vision for the future of their organization. It was also found that the invented personal R&D vision was based on mainly unofficial information sources and second hand rumors. If an R&D employee sees the future as unfavorable, this deteriorates the working climate and lowers motivation and output levels. Technology leadership had a mental effect on R&D employees by raising their self-esteem as engineers, and it had a positive effect on employees’ long term motivation in the case R&D organization.

The issues that were related to the research process in this study were discussed with senior researchers who have generally agreed on the achieved results. Also, the key informants had reviewed the draft and agreed on the results of this study.