Creating Engagement on Instagram. Google's Made with Code Campaign 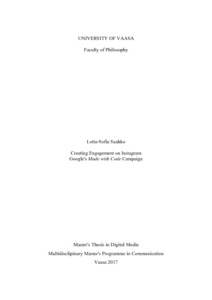 Google’s posts on the @madewithcode Instagram channel are studied on the basis of Aristotle’s rhetoric means of persuasion. The analysis shows that in almost half of the postings (43 percent) no rhetoric mean at all is used. 27 percent of the posts use pathos, 17 percent ethos. Yet, those postings with rhetorical means evoke higher engagement, which proves the theory of the relationship between rhetoric and engagement right. Therefore a new theory is built in this study, stating that the use of rhetorical means evokes engagement on social media postings.