Why Millennials Initiate E-WOM? Cultural Comparison of Finland and Russia 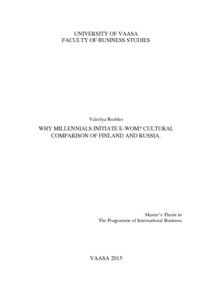 This study explores motivation of millennials for e-WOM initiation and possible influence of national culture on this motivation. The theoretical part reviews previous studies on motives for WOM, e-WOM and UGC initiation. In order to understand the phenomenon of e-WOM we reviewed three related phenomena such as WOM, e-WOM and UGC. To explore the motivation from more comprehensive perspective we used a Theory of Planned Behavior that helped us to understand what else could influence the motivation of millennials other than motives. We also reviewed the distinctive features of generation Y to understand the possible influence of it on outcome of the study. Further, we took investigated the Hofstede’s dimensions of national culture and their influence on possible results of research.
We built a theoretical framework upon theoretical part of the study in order to support an empirical part. The study is of qualitative type and use semi-structured interviews to investigate a research question. We conducted eleven interviews the results of which were twelve cases of e-WOM initiation.
The findings show that there is clear influence of national culture on motives that drive e-WOM initiation. However, there is no influence on other factors that were derived from the Theory of Planned Behavior. Moreover, such factor as subjective norm did not find a support of influencing a decision about e-WOM initiation. This fact could be explained due to certain distinctive feature of the generation Y. However, the relationships between platform factors and decision about e-WOM initiation were supported. Moreover, there are certain evidence that these relationships might be two-way depending on e-WOM type. The managerial implication of this study suggests that the methods of managing e-WOM should take into consideration possible cultural influence and platform factors.