LEANER THAN THOU - Linking Lean Production, DFMA and Production Region in the Automotive Sector 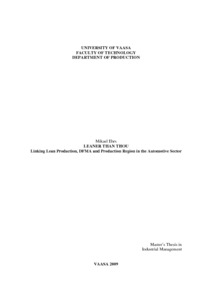 The Asian (Japanese) Lean production methods won considerable acclaim with the advent of the book “The Machine That Changed the World” by Womack, Jones and Roos. Design for Manufacture and Assembly (DFMA) is a Lean tool aimed at reducing the parts usage and assembly time of the product. It is said that the two principles are connected, and that Asian automobile manufacturers are well versed in this tool. It should be possible to test this claim by comparing the service time and parts data of altogether twelve Asian, North American and European cars, on the basis of collision insurance data from 1990-1991.

This thesis will attempt to answer three questions: will Asian cars be Leaner in design than North American and European; will the cars’ results be so close for different companies in the same region that something can be said about the region’s expertise? And what cars will come out on top and bottom in the test? The analysis involves performing Chi squared tests on the significance of region in using “Lean” assemblies, and visual and qualitative evaluation of the test data.

The results are ambiguous. While the Asian producers show strength in reduced service times – significantly so – the parts count, on the other hand, is dominated by the North American producers. That analysis, however, shows low – if any – statistical significance. Regional cohesion is furthermore visible in service times, not in parts count. Finally, the comparison shows Hyundai Sonata and Ford Taurus heading the service time and parts evaluations, respectively, with Saab 900 and Honda Accord trailing at the other end of the spectrum. The significance of this is unclear: a broader data analysis seems necessary.