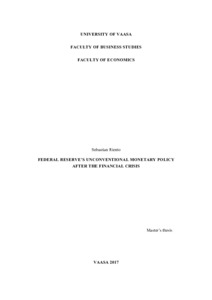 The financial crisis proved to be an extremely severe and long economical distress in the American economy. The crisis did not just entail a housing market crash but expanded into a nationwide recession that nearly caused a systemic crash of the whole US financial sector. During the midst of the crisis the US central bank, the Federal Reserve came to a conclusion that its conventional monetary tools were not sufficient to solve the problems within the economy and initiated a number of monetary easing programs that departed from the bank’s conventional policy regime. Among other monetary actions, the new unconventional tools included many rounds of large-scale asset purchasing programs (quantitative easing) and zero bound interest rate policies. This study focuses directly into studying the effects of the Fed’s quantitative easing and interest rate policies for the US economy after the financial crisis.

The purpose of this study is to examine the developments of the economical factors during 2009 and 2016 that the Fed has informed as its targets to influence through its monetary policy. In support of the empirical study, the paper goes through the background of the crisis and discusses the traditional policy regime of the US central bank. In the empirical part of the paper, the developments of the chosen economical factors are being compared against the Fed’s asset purchasing data and the developments of the Fed’s main directing interest rate. The statistical analysis is conducted using regression analysis and vector autoregressive modelling.

The results of the study confirm that the recovery has been slow in many of the target figures the Fed has wanted to influence. The unconventional monetary actions seem to have been more effective for adjusting different asset yields but it would appear that the Fed’s failure to promote more expansive credit environment in the US might have caused the slow recovery in other economical sectors as well.