Translating Politeness for the Screen. Politeness Strategies in Sex and the City and its Polish Subtitles. 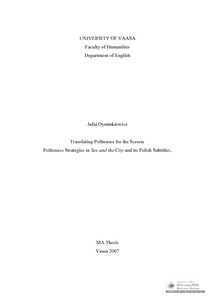 In particular American TV series are popular around the world. In their new context they are subtitled or dubbed. In subtitling there is a shift from spoken to written mode which affects the translation. Due to the restrictions of time and space on screen, the original text needs to be condensed.

The primary goal of the present study has been to examine what happens to verbal politeness in requests in the subtitling of Sex and the City into Polish. The material consisted of the last six episodes of final season of the series. Only the requests of the four main characters, Carrie Bradshaw, Samantha Jones, Miranda Hobbes, and Charlotte York, were taken into consideration. As the theoretical background for the study, I have used Penelope Brown’s and Stephen Levinson’s (1994) theory of politeness, while the analysis of the translation strategies has been based on Gideon Toury’s (1980) view of potential expressions of matricial norms.

It has been assumed that because the main characters are “new women” and close friends, most of their requests would be delivered on-record. The hypothesis was that the need for condensation as well as the language differences will have an impact on the strategies. In consequence they are likely to be changed into shorter and less time-consuming ones in the translation.

The changes that appeared in the translation were mostly due to the constraints of time and space of subtitling. Long expressions were likely to be replaced with shorter and less time consuming ones. There were also a few examples where the alterations were clearly caused by the differences between the English and the Polish languages as well as between the source and the target culture.