Construction of Binary Oppositions in War Reportage: A Case Study of the Media Coverage of the 2014 Gaza War 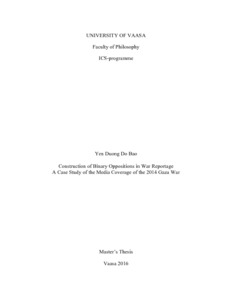 One of the typical characteristics of war/violence-oriented journalism is to represent warring parties in binary oppositions. The purpose is to justify violence, which turns every act of the Self into a defense mechanism, while that of the Enemy into intimidation, a violation, a threat. This approach is common in mainstream reportage of wars and conflicts, in which an excessive amount of attention is paid to the duel between the assumed two sides of the war, indicating a news value bias towards negativity and violence. On the other hand, stories about the background, the context leading to the war, conflict transformation, peace resolutions, the invisible and visible effects that the war can impose on the lives of civilians receive relatively less exposure. These debates are central to the theory of peace journalism.

Premised on Johan Galtung’s concept of peace journalism, this study aims to question the role of the media in the Israel–Gaza war 2014. The data are twelve articles retrieved from the online archives of two news outlets, Haaretz and CNN. The study focuses on their representations of conflict actors and events that took place during the war, specifically in terms of four topics: the onset of the war, the battle of Shuja’iyya, the rhetoric of terrorist stronghold, and lastly, Hamas. The study employs Teun van Dijk’s framework of Critical Discourse Analysis, with an emphasis on the macrosemantic structure and dimensions of discourse semantics including perspectives, lexical choices and propositional structures. The study also takes into consideration the uses of multimodal texts such as images and videos, as well as their compositional patterns within the articles.

The analyses reveal that there is an imbalance in reporting, especially in terms of perspectives, as Israeli official narratives of the war are predominant in the news discourses. Hamas, one of the main conflict actors, by contrast, often appears in a trove of antagonistic representations that are based on preconception and bias towards the organization. The two news outlets also display a difference in their approaches to the news. While a large portion of CNN’s content is devoted to the confrontation and exchange of fires between Hamas and Israel, Haaretz proves to be more creative in terms of perspectives. Additionally, by including a number of articles that propose solutions and alternatives to the conflict, the latter implies an effort to find peace and put an end to the war. The practice of Haaretz demonstrates that violence-oriented reportage is avoidable.