Increased co-movement or contagion between economies? Evidence from 45 stock markets 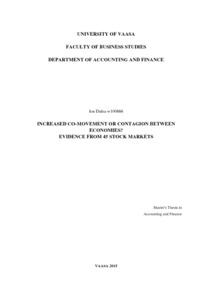 The Global Financial Crisis of 2007 - 2009 and the European Sovereign Debt Crisis represent two of the most dangerous treats at the stability of the modern financial system. The consequences of these two crises translated their impulse all around the globe, contaminating everything in their way like falling domino pieces. This has revealed that the modern financial system has flows and that certain actions need to be implemented in order to avoid in the future these catastrophic events, and to preserve the stability of economy.

This thesis investigates how the above mentioned crises have changed the co-movement and correlations between different countries and translated their consequences to other economies, by testing for contagion. Using an asymmetric GARCH model, the paper examines the evolution of the correlations between 45 major stock markets, in different economic states, for the period 2000 - 2014. The results reveal that during the Global Financial Crisis the correlations between individual stock markets and the global stock index increased significantly, resulting in contagion at the level of the majority of countries included in the analysis. After the crisis, the correlation levels tend to decrease. However, when compared to the pre-crisis level, values are considerably higher, suggesting that the global stock market is becoming more and more integrated, and that there may still be some contagion left in the markets. The results for the European Sovereign Debt crisis suggest that every member of the group felt the consequences but in different measure. The crisis originated at the periphery, and then gradually shifted to the core.