Public Administration of Human displacement in Sudan: How the internally displaced persons can be managed and their role in management of their problems? 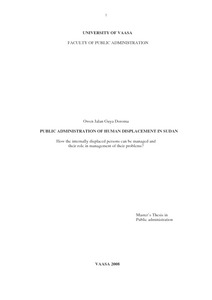 Displacement of people has existed even before the creation of states, especially due to natural disasters. After formation of states, public administrative policies created conflicts, and it became the major source of displacing people from their homes of origin. Conflict always forces people out of their permanent homes or places and countries. The aim of this study is to find out, how can displaced people be adminis-trated? What is the role of IDPs in managing themselves? As such, the protection of displaced persons needs better public administrative political and strategic management plan. Public administrative policies are those policies which necessitate government action. Internal displacement could cause not only inter-nal instability but could go across borders and upset external and regional stability, this calls for interna-tional and inter-governmental assistance in support of national efforts.

This study examines the role of displaced people in nation building, and what is needed for them to be efficient, effective and active in carrying out their duties like other non-displaced citizens. The source of conflict is usually due to lack of good administration and management policies. In any state, citizens need effictive protection, as such; the public office should create a relationship of trust and duty. This requires all authority to influence and motivate its citizens in carrying out their duties, with the same absolute con-formity to moral standards, to the spirit of the constitution and law, and to the common interests of the people, which may be insisted upon in the use of public money or any other common property of the peo-ple. Even if it is difficult to put the law, rules of duty in practical form, its application should be without discrimination.

It is luck of these, which resulted into the north- south Sudan conflict which broke out upon the departure of the colonial administration in 1956, is by far the most devastating and longest running of conflict in Sudan. Broadly speaking, the north is led by Arab musilims, with cultural, economic, political and his-torical ties to other Arab states, and the south by black Africans, predominantly Christian, with ties to other African stats.The result is a Sudan of two tiers on departure of the colonial administration. The eco-nomical and political north and the isolated, underdeveloped South went into conflict even before inde-pentance in 1955. Forced displacement in the various regions of Sudan has mainly resulted directly or indirectly from fighting between government troops and their allied local militias on the one hand and various insurgent groups on the other. This conflict pattern has been further complicated by governments or rebel groups in neighbouring countries back-ing the different warring parties within Sudan. Despite the scale of Sudan’s displacement crisis, no systematic mechanisms to monitor population movements have been set up in the country and most figures are based on estimates and projections. In January 2005 the two parties signed the Comprehensive Peace Agreement (CPA) which marked the official end of the con-flict, but has yet to lead to sustainable peace or a durable solution for the millions of forcedly displaced people.