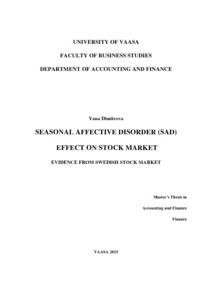 In general the theory of finance assumes that the markets are efficient, but behavioral finance concept shows that markets are not efficient due to deviations known as anomalies. This study focuses on a seasonal anomaly called the Seasonal Affective Disorder (SAD). The anomaly refers to significantly lower stock returns before winter solstice and abnormally higher after winter solstice.

This paper investigates the role of SAD phenomenon on the Swedish stock market. It also examines the possible influence of weather factors such as air pressure, precipitation and cloud cover on the Swedish stock returns as well as the SAD impact on shares in a matter of risk. The research examines two stock market indices-Nordic Small Cap index and Stockholm OMX30 index. The studied time period for the Nordic Small Cap index is 2006-2012 and for the Stockholm OMX30 index is from 2003 to 2012. The market data comprises of daily log returns. Main testing method is regression analysis with seasonal dummy variables. In addition to Ordinary Least Squares (OLS), the GARCH model is also used in order to measure the shares volatility.

The results indicate that the SAD effect can be observed during autumn on the Nordic Small Cap index returns. The returns during the period from the autumnal equinox until the winter solstice are lower than usual. Besides that, Monday and tax dummies for the same index ap-pear to be statistically significant. The returns on the first day of the week are lower than dur-ing the other days of the week. At the end of the year, during tax time, the returns for the same index appear to be higher than the average returns. The weather factors do not affect the stock returns. The GARCH model results show that the tax arrangements at the end of the year cause a change in the index volatility that leads to an increase in the returns whereas the Monday effect on the risk returns is expressed in a decrease.

This study considers a possible connection between SAD anomaly and January effect. How-ever, the regression results do not confirm the existence of the January effect on the Swedish stock market.