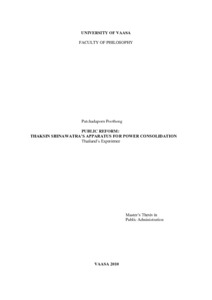 The purpose of this study is to provide the reader with a detailed analysis of the drives and forces which influenced the administrative reforms implemented during Thaksin Shinawatra‟s premiership.
Crippled from the 1997 Asian financial crisis, Thailand felt the necessity to find the right leader who could help Thailand rebuild its economy. Thaksin Shinawatra was chosen. To a lot of people, the man‟s pioneering socio–economic policies as well as many administrative reform programs were tremendously successful and beneficial; therefore Thaksin became very popular, particularly among the poor. Not only that his executive power was legally enhanced by the 1997 constitution, but the ideas of New Public Management and the concept of good governance were also intensively incorporated to various administrative reforms to further strengthen the power of the prime minister. The fact that Thaksin became much more powerful was threatening to some because the privileges that once were traditionally shared by the senior bureaucrats and high–ranking military officials were shifted largely to the hands of the prime minister which he abused for private gain.
To study such drives and forces, the thesis applies Christopher Pollitt and Geert Bouckaert‟s model of public management reform to the study. By using the model, the thesis presents why and how various features of the New Public Management ideas and the concepts of Good Governance were adopted as well as it presents the reform process and results. The model is used to offer an explanation of the author‟s argument that New Public Management and the concept of Good Governance were used not only to enhance administrative efficiency, but also to redistribute bureaucratic power to the political executive.