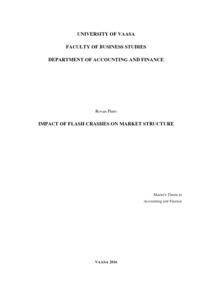 The Flash Crash of May 6, 2010 was one of the biggest flash crashes ever to be recorded in the history of the US stock markets. The Dow Jones Industrial Average sank down to 998.5 its highest intraday fall. Other indexes also met with the same fate resulting in a very low overall market sentiment. The impact of Flash crash created havoc in the market and new developments have come up in 2015 which points to manipulation. This clearly shows stronger need for regulatory intervention to curb such events from happening again.

The thesis investigates abnormal market returns over a period of one year starting from three months before the crash. The paper constructs an event time line to clearly indicate how stocks reacted before, during and after the Flash Crash. The paper examines abnormal returns from twenty one stocks of the Dow Jones Industrial Average. The results indicate that the stock return on the day of the crash is negative while the returns on subsequent trading days are low due to negative market sentiment towards the event. However the effect of the negative return is restricted only for one or two days after the crash.