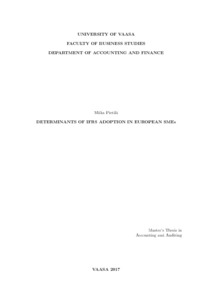 The European Union (EU) introduced a common set of accounting standards in 2005, International Financial Reporting Standards (IFRS) is mandatory for publicly listed companies in Europe and it is widely used around the world for publicly listed companies. Private companies are usually not obliged to adopt IFRS but in most of the European countries are allowed to use IFRS in financial statements. This research is motivated by the debate on the benefits and costs of adopting IFRS. There is not extensive prior research on adoption of IFRS in Small and Medium-sized enterprises (SMEs) in Europe. Majority of companies in EU and the world are SMEs and the voluntary adoption of IFRS is an interesting topic. Previous literature claims that adoption of IFRS increases financial information comparability internationally and nationally and as a consequence the usability and usefulness of financial information. There is also contradicting literature emphasizing the costs and complexity of wider implementation of IFRS over the benefits or presumed enhancements in financial statement quality.

The aim of this research is to find determinants affecting the adoption in the scope of SMEs in Europe. The determinants explaining the choice of accounting policy discussed in this research are the size of a company, international activities of a company, the profitability of a company, the reputation of the external auditor of a company and operating country of a company. The research is conducted using a sample of 116 602 companies from 21 European countries. Of the companies in the sample 9.4% report using IFRS while the remaining 90.6% use Domestic Accounting Standards (DAS). The data is analyzed using logistic regression on the adoption of IFRS.