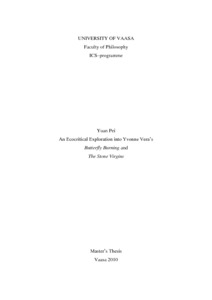 Yvonne Vera, one of the most outstanding novelists in Zimbabwe retells the agonies that women experienced in a male–dominated society and presents us with the most chaotic moment in Zimbabwe‘s history. She daringly confronts the taboo topic in Zimbabwe – the 1980 genocide. Her poetic writing style has gained her international readership and literary critiques. By employing ecological literary critique, also known as ecocriticism, my thesis explores into the discursive landscape in Vera‘s two award–wining novels: Butterfly Burning (1997) and The Stone Virgins (2002) and illustrate how the landscapes in her novels reveal the culturally, socially and politically sensitive issues, such as feminism and colonialism and nationalism.

A qualitative literary research into her novels reveals that the discursive landscapes in her novels are socially, historically and politically conducted. Intertextual analysis shows how ecofeminist dualism is manifested in her novels. Dualistic connections such as woman/nature, man/culture, and wilderness/city are found to be abundant in Vera‘s novels. The spatial difference between the white citiness and the black wilderness has its colonial and nationalist implications. The nationalist authenticity is attached to the trees and the roots buried underground.

An ecocritical study in African literature provides us with some critical considerations over our anthropocentric notions on human culture. A dialogue between human culture and the natural world may not only inspire us to review the current ecological crisis in our planet from a humanistic perspective, but also reveals ecological interconnections between humankind and our social–culturally constructed surroundings.