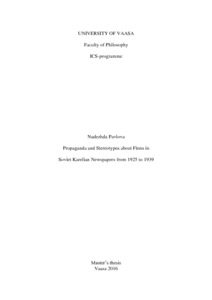 People are often exposed to propaganda. However, propaganda provides prejudiced and subjective data, which aims at spreading points of view, arguments and facts to mold public opinion. As research on propaganda has shown, political leaders often spread inimical images of states with other political aspirations through propaganda. As a consequence, people construct stereotypes. Stereotypes represent a fixed pattern of perceiving and interpreting information; an established attitude towards events, actions, behavior. Historical examples prove that stereotypes about other ethnicities are transmitted from generation to generation and appear to be very viable. In this regard, Finland and Soviet Karelia represent a special case for analysis because of their interconnected and interdependent historical and cultural background.

The main aim of the research is to examine propaganda in the Soviet Karelian newspapers in the 1920s and 1930s, and what stereotypes about Finns were spread at that period. The current research is qualitative. After discussing theories on propaganda and stereotypes and elucidating the historical background of Karelia, framing analysis is used for analyzing articles in the Soviet Karelian newspapers.

The findings show what images of the Finns were constructed and spread in the region by the Soviet Karelian newspapers. The newspapers emphasized the difference between the red and the white Finns, provided argumentation and thus, created stereotypes about the neighbors. No opposing points of view in the press which made the stereotypes more vital were offered. As the research shows, the constructed stereotypes were in fact an important part of Soviet propaganda.