The Behaviour of Volatility Ratio: Implied vs. Realized Volatility of the S&P 500 and DAX Stock Indices 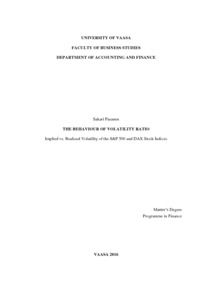 The volatility ratio is defined as an implied volatility divided by a realized volatility. The purpose of this thesis is to investigate if some chosen macroeconomic variables make an impact on the volatility ratio. The variables are base index return, unemployment rate, risk free interest rate, economic uncertainty, consumer consumption, market mode, and inflation. It is also investigated whether the time of the years 2007 – 2008 financial crisis have had an effect on the volatility ratio level. The literature review of the thesis goes through the studies on option implied standard deviations, implied volatility, and relationship between the implied and realized volatilities. The second part of the thesis covers the basics on option pricing, volatility models and theory on correlation.

The measure for the realized volatility is the monthly sample standard deviation of the daily index return. The indices used in this thesis are the S&P 500 and DAX. Values of the volatility indices VIX and VDAX are used as implied volatilities. Multiple linear regression analysis is used as a method for the final analysis with stepwise variable se-lection. Data used for an independent variable (volatility ratio) in the thesis is daily values for the indices S&P 500, VIX, DAX, and VDAX, which have been obtained from Thomson Datastream –database. Data for dependent variables is monthly values for earlier mentioned macroeconomic variables. Data spread is from the start of the year 2002 through the year 2014.