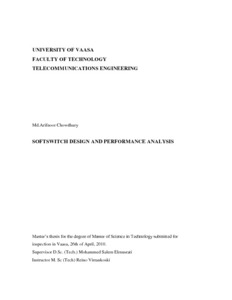 The increasing number of subscribers’ demands in telecommunication sector has motivated the operators to provide high quality of service in cost effective way. Moreover, operators need to have an open structure system so that they can move their systems to the next generation network architecture. For this purpose, Softswitch is an appropriate technology because it is a safe and cost efficient solution and though it can migrate from traditional circuit-switching based telephone system to internet protocol packet-switching based networking. Softswitch network divides the logical switch into several parts with different functions such as signaling gateway, media gateway, media server, etc. Standard communication protocols are implemented between those parts. Softswitch is software-based system to make connection between devices, and moreover to control voice calls, data and routes calls through different entities of the networks. Softswitch supports management functions such as provisioning, fault handling and reporting, billing, operational support, etc. Softswitch suitable for all types of traffic and services so it is very demanding in the competitive world of mobile operators.