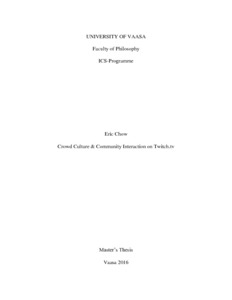 Internet Protocol Television (IPTV) and e-sports have exploded in popularity in recent years. At the forefront of this growth is the live streaming website Twitch.tv, now one of the most popular websites in the world. Though live streaming has existed before Twitch, the website has proven to be the dominant name amongst its competitors. From this popularity has arisen a distinctive Twitch culture, complete with its own language, customs, norms, and values.

This study aims to decipher and understand Twitch’s behavior through Uses & Gratifications theory as well as previous research on Collective Behavior. Specifically, the thesis addresses the following research questions: How is the interaction of chat on Twitch.tv structured? What are motivators for communication on Twitch.tv? How is the Twitch community unique to other web-based communities?

All streams were selected from channels for the popular game Dota 2. Dota 2 was selected due to its popularity, well-established culture, and author familiarity. The streams of both competitive tournaments and private streamers were examined, with over 12 hours of chat logs being examined. Comments were divided into categories and the use of language on the medium was dissected.

Though hypothesized to mirror other online communities, Twitch users’ behavior was found to be far closer to that of a crowd; something unique to the subcultures preceding it. The implications of this are explored, investigating the altered norms and social atmosphere which contribute to Twitch’s seemingly erratic behavior. The Contagion, Convergence, Emergent Norm, and Value-Added models are consulted in order to catalogue and understand the collective behavior that occurs in the chat. Twitch is a new type of gathering place on the Internet; one which does not follow the rules of traditional Internet communities, and offers a completely different experience to users in contrast to traditional media.