Culture, Corruption and Public Management Reform: Perspectives on Problem of Ethics in the Nigerian Public Service 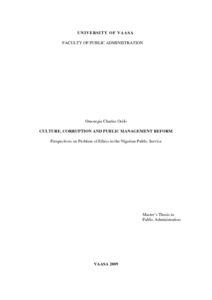 Corruption has been adduced in recent past to be synonymous with the culture of developing countries especially African culture by some schools of thought. The primary aim of this research is to see how true this deduction and premise are? Culture, corruption and public management reform are different concepts, how do they affect one another in public service related issues? A broader view becomes a necessary tool in this type of analysis. Culture represents living entity, corruption represents an act and while public management reform represents a state of dissatisfaction that requires a change.