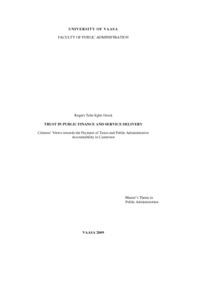 This study takes a critical look at citizens’ version of the economic “truth” in Cameroon, regarding the legitimacy and authority of the state to tax them under the current conditions of governance in the country. In this sense, it examines citizens’ perceptions of the social conditions of public governance in Cameroon. The study argues that over the years the memory that citizens in Cameroon have about the public governance system has been built in the negative experiences of public institutions as asphyxiating rather than enabling, as socially irresponsible rather than responsive to their needs, and as administratively unaccountable rather than transparent and accountable. This cushions negative perceptions of public governance processes such as taxation. The study adopts the democratic developmental state as a recent theoretical model in debates about state institutionalism, but grounds its logic even more in the concept of collective or social memory, which highlights the impact of past experiences and cultural contexts in the formation of citizens’ views or opinions (such as trust/distrust) over issues of broad public concern, like taxation.

As a qualitative exploratory study of citizens’ trust in public institutions and its impact on their perceptions about taxation in Cameroon, the study is based on a combination of primary and secondary sources of data. The primary data are mainly selected newspaper articles that record and convey the unfiltered perceptions and opinions of citizens. These are used to support analytical insights about the relations between citizens’ perception of the complex interfaces of state institutions, the behavior of public officials, the social conditions of Cameroonian communities and the use of tax revenue in the country. The strength of the primary data is supported by the use of secondary sources such as published surveys in reports and newspapers, as well as a critical review of articles and books.

The study shows that in addition to the dismal failure of public institutions at providing adequate services to citizens, following the country’s transition to multi-party politics in 1990, the increasing activism of some civil society groups such as well as donor efforts, have all compelled the government of Cameroon to adopt a series of anti-corruption campaigns that have themselves been mired in contradictions. The consequence has been a heightened sense of citizens’ distrust towards public institutions. This distrust is framed within the narrative of citizens’ rights to public administrative accountability and services. Even more important, these negative perceptions of the public governance system in Cameroon translate into a deeper sense of frustration when it comes to paying taxes to a state that is seen as irresponsible and accountable to its citizens. Given the emancipative force that Cameroon’s democratic transition in 1990 offers these civil society groups, the study concludes that increasing democratization in Cameroon and Africa yields a deliberative space for the civil society organizations to strengthen the agenda on public institutional reform and the transformation of the conduct of public officials towards more socially responsible and accountable governance.