The effect of non-audit services on audit quality 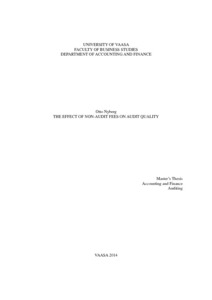 In spite of great interest, empirical evidence over the association between non-audit services, audit quality and auditor independence has yielded mixed results. However, a great number of studies proposing non-audit fees to have a positive effect on audit quality could be viewed suggestive while making conclusions. Also, criticism towards the results of studies proposing non-audit fees to have negative effects on audit quality e.g. Frankel et al. (2002) could be utilized when analysing this relationship. Thus, general perception amongst academics seems to be in favour of provision of non-audit services to audit clients.

Nevertheless, these results can only be viewed as tentative due to a number of reasons e.g. limited number of companies listed in Finland and hence, included into the regression model. It can be concluded that further research could be utilized to further investigate the relationship between audit quality and non-audit fees.