INFLUENCE OF BRAND ORIGIN TOWARDS CONSUMERS’ PREFERENCE AND RECOGNITION: COMPARISON OF GLOBAL AND NORDIC BRANDS BY OLDER FINNISH CONSUMERS 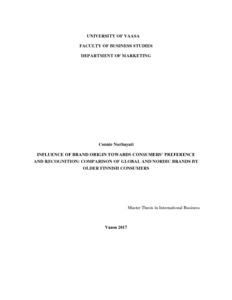 Although older population exist significantly in the demographic profile of many countries in Europe and North America, they have never been well-represented as a market segment. For the last five decades, the demographic structure in Europe has changed significantly, including in Finland. The low birth rates and higher life expectancy consequently change the shape of the demographic pyramid and put the older population to be a major part of the overall population. This study is focused on older Finnish consumer behaviour towards Nordic and Global brands, including their sub-segmentation and all the factors that may influence their preference, purchase habit and buying decision making.
The theoretical framework is constructed by theory of country origin, country animosity and affinity as well as the relation of country origin with the perceived product quality by consumers that are linked to the branding theory elements such as brand positioning, brand loyalty, brand equity, and followed by the explanation of consumer behavior, segmentation, buying decision making process and a closer look of older Finnish consumers’ profiles. This framework is the basis for conducting the empirical part of the research. The empirical part of the study presents the data that was obtained with an ethnographic approach by conducting the participants’ observation and in – depth semi – structured interview which has given enormous insights about the older Finnish consumer behavior.