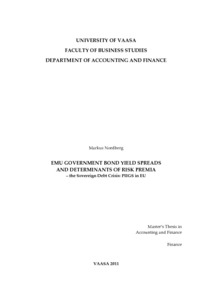 Globalization and attributed financial markets integration are central themes and topics in today’s international finance. Since the start of 1999 when the euro was introduced, the integration started to accelerate among European financial markets and especially on the European government bond markets. This is also widely acknowledged in the topic’s previous literature. However things started to turn upside down since the beginning of the turmoil in financial markets caused by the US’s subprime mortgage crisis. The spreads between the EMU government bond yields begun to widen and in late 2009 the solvency of some member states became questionable.

The aim of this thesis is to study how large have the EMU government bond yield spreads become during 2010. Moreover how well the country-specific EMU convergence criteria, international risk and liquidity premium explain these spreads.

In line with the previous literature the evidence suggests the wider spreads are caused by the credit quality factors driven by the current market situation. Thus despite the earlier integration some risk premiums have grown unbearable while the EMU government bonds have became relatively strong substitutes.