ROLE OF TRANSACTION COST THEORY, AGENCY THEORY &KNOLWEDGE BASED THEORY IN DECISION OF OFF SHORING INFORMATION SYSTEM IN CROSS CULTURAL CONTEXT A case study of Finland-India 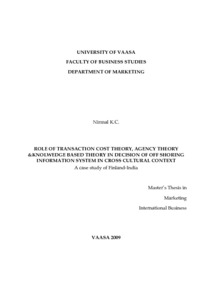 Due to globalization, outsourcing of Information system/Information Technology (IS/IT) has become a competitive necessity, even more off shoring IS has become new strategy to cut cost and focus on Core competency. Managers are vigilant about where and which IS segments to off shore. For the past one decade it has been noted that off shoring IS from Finland towards India has increased tremendously, however research into this dynamic nature of IS in these two countries is hardly noted.

The objective of this study is to explore the role of Transaction cost theory, Agency theory, knowledge based Theory into off shoring decisions by Finnish manager in cross cultural context. In the theoretical part, first the major components from the theories were developed and also the distances between Finland & India in cultural context were identified. Firstly the off shoring is defined and its relative advantages and disadvantages have been discussed. Secondly, various relevant cultural dimensions have been analyzed. Thirdly, several important propositions have been developed from theories.

For the empirical study, the various related firm publication, an expert consultant, and semi structured telephone interview were used. It was found out that Managers are prompted more by reactive motivation to off shore than proactive. Due to the distant geographical distance trust still seems infant at beginning, which is overcome by certain span of time. Besides from fluency in English, cheap cost, to some handful of well renowned vendors, Technical expertise of average Indian vendor is still doubted by Finnish manager which needs constant monitoring from Finnish side. With culturally sensitive communication/understanding and proper engagement from Finnish side, Knowledge transfer can occur in cost effective manner. All in all Finnish Managers perceive Indian vendors as quite a worthy recipient of IS off shoring in the future.