Gender Identity as a Marker of Cultural Crisis in Marriage. A Study of Two West African Novels 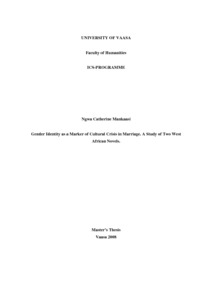 A majority of West African women, like most other African women, are victims of society regulated by cultural norms and traditional values, especially in the marital institution. The present comparative study of Mariama Ba’s So long a Letter and Buchi Emechita’s The Joys of Motherhood seeks to explore Gender Identity as a Marker of Cultural Crisis in marriage. This comparative study reveals the increasing attention being accorded to the mediation of gender relations. Most African women are powerless and voiceless victims of ever deepening oppression rooted in layers of male-supremacist tradition. During and after colonization most West African women declined from a position of power and self-sovereignty to becoming a man’s helper. Patriarchy was established firmly in a macho conviviality and a one-dimensional and minimalised presentation of women who assumed peripheral roles. Most male writers in the early phase of African literature encouraged the marginalization of women: the female characters created by male writers were made marginal to the plot of the fiction while a few emerge as credible protagonist. The female gender was trivialized through practices like patriarchy, tradition, gender socialization, polygamy, class religion and domestic enslavement.

Using comparative methodology, this thesis shows how African female writers like Mariama Bâ and Buchi Emecheta make the culture of African art relevant to the understanding of gender relations, suggesting how women can be redeemed in contemporary writings, and also how these writers react to sexist depictions of women and gender power or identity. A countervailing set of images change the notion of African women as victims, casting them as assertive and self-reliant heroines. African female writers’ attempt to bridge the gender rift through their writing gives a voice to the silenced, oppressed women.