The Control of Corruption in Nigerian Government: A focus on duties and functions of an Anti-corruption Agency 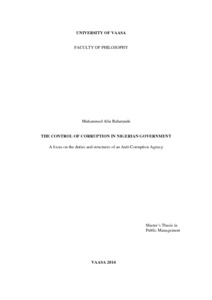 Qualitative research method is adopted for this research. This method is based on documentary analysis which has been proven to be one of the best ways of doing research in management. In public administration, documentary analysis is used for phenomena of interest that cannot be measured through personal interviews, with questionnaires, or by direct observation. Moreover, the central concepts of this thesis are based on corruption, ethics, and control.