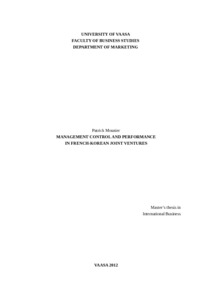 South-Korea is one of the country in the world with the highest rate growth. To develop its economy, this country welcomes foreign direct investments (FDI) with free economics zones and free trade agreements. Further the Korean peninsula has a strategic location due to its short distance to China and Japan. As the result, a large amount of foreign companies invests there (about 40% of the annual FDI are new). International joint venture (IJV) is an entry mode largely used for a company to go abroad. Moreover, management control and performance have been considered by the scholar as two important factors to consider while doing an international joint venture. Thus, the present thesis aims to investigate the relationship between these two factors in joint ventures made between a Korean and a French company located in South-Korea.

To answer the question, a quantitative research is conducted through a comparative case study. The sample of this study is composed of 4 French MNCs undertaking a JV with a Korean company in South-Korea. A face to face interview with a French manager of each case has been done to reply to a questionnaire of 33 questions.

The empirical part of the study indicated that there is no evidence on the relationship between management control and performance. In the 4 case studied, the absence of control has been observed. Indeed, the result of success of the venture where the result of a great selection of the partner (similar company culture) and a clear agreement between the partner about the venture management.