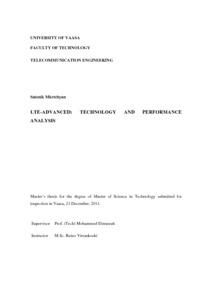 Wireless data usage is increasing at a phenomenal rate and driving the need for continued innovations in wireless data technologies to provide more capacity and higher quality of service. In October 2009, 3rd Generation Partnership Project (3GPP) submitted LTE-Advanced to the ITU as a proposed candidate IMT-Advanced technology for which specifications could become available in 2011 through Release-10 . The aim of “LTE-Advanced” is to further enhance LTE radio access in terms of system performance and capabilities compared to current cellular systems, including the first release of LTE, with a specific goal to ensure that LTE fulfills and even surpass the requirements of “IMT-Advanced” as defined by the International Telecommunication Union (ITU-R) .

This thesis offers an introduction to the mobile communication standard known as LTE Advanced, depicting the evolution of the standard from its roots and discussing several important technologies that help it evolve to accomplishing the IMT-Advanced requirements. A short history of the LTE standard is offered, along with a discussion of its standards and performance. LTE-Advanced details include analysis on the physical layer by investigating the performance of SC-FDMA and OFDMA of LTE physical layer. The investigation is done by considering different modulation schemes (QPSK, 16QAM and 64QAM) on the basis of PAPR, BER, power spectral density (PSD) and error probability by simulating the model of SC-FDMA & OFDMA. To evaluate the performance in presence of noise, an Additive White Gaussian Noise (AWGN) channel was introduced.