FIGHTING CORRUPTION IN CHINA: A Comparative Analysis of Anti−corruption measures in China and Singapore 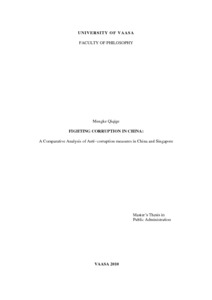 This study deals with the corruption situation in China and Singapore. Corruption is a serious issue not only occurs in the underdeveloped countries but also the developing and developed countries. The reality is that the majority of the countries suffer from corruption and problems it causes. As neighboring countries, China and Singapore performed very differently on the matter of curbing corruption. Singapore has one of the cleanest governments in the world while China is suffering from the problems caused by corruption.

China has been studying and drawing lessons from Singapore for over 30 years. However, the results are not quite what people had expected. The Singaporean example in curbing corruption seems ineffective when applied in China. By comparing the anti–corruption measures in China and Singapore, I explain the reasons why the adopted policies in China failed to function as effectively as in Singapore in order to shed some light on the issue of how to make anti–corruption policy that actually works in China.

The idea of thinking that by simply copying the Singaporean experiences, China could tackle the problems as well as Singapore has, is naïve and unrealistic. The problem that the anti–corruption measure is ineffective in China is because there is no matching environment for it to grow. In order to solve the problem, systemic, structural, and policy changes must be initiated beforehand to build the foundation for an effective anti–corruption policy in China.