Cultivation of microalgae in wastewater -water treatment and biomass production 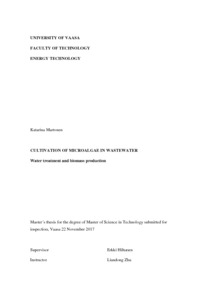 The purpose of this thesis is to study whether cultivation of the microalgae Scenedesmus dimorphus is feasible in wastewater from the local municipal wastewater treatment plant Pått in Vaasa. Microalgae were cultivated in wastewater from three different points in the wastewater treatment process. The first point is after the pre-sedimentation pond, the second is after the sedimentation pond and the third is effluent that is about to be dispatched to the sea. The study was conducted in a laboratory, in two different temperatures and light intensities. Microalgal biomass accumulation was determined by optical density measurement and weighing, and growth parameters were calculated. Removal of total nitrogen, total phosphorous, ammonium and chemical oxygen demand from the wastewater was measured with photometric test kits.

The removal of nutrients was most efficient from the wastewater collected after the pre-sedimentation pond in both studied temperatures, however more efficient in 24°C than in 16°C. During the first 24 hours total phosphorous decreased by 60% to 77%. Removal of total nitrogen was most efficient in the wastewater collected after the pre-sedimentation pond, where the nitrogen appears in the form of ammonium. Under the conditions of the study all ammonium was removed during nine days of cultivation. No decrease in chemical oxygen demand was noticed, on the contrary, chemical oxygen demand increased by 123% to 175% in the wastewater collected after the sedimentation pond. The accumulation of biomass was quite similar in all three tested waters and most efficient in higher temperature and higher light intensity. The mean specific growth rate was (0.11-0.15) day 1 and the mean doubling time (4.7-6.5) days. The mean biomass increase was (0.56-1.18) g L 1 during the first nine days of cultivation, and the mean biomass productivity was (0.04-0.18) g L-1 day-1.