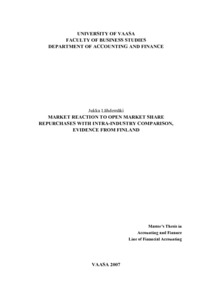 Research was done for the companies which made a share repurchase announcement during years 1998 to 2005 in the Helsinki stock exchange. Study included 161 samples and 59 clean samples. Standard Event Study method was used when estimating abnormal returns and statistical significance was observed with the help of t-test. Event window ranged from twenty days before to ten days after the announcement. HEXportfolio index was used as a benchmark when investigating abnormal returns for the announcing firms and for the reference portfolio of rival firms.

Results indicate that abnormal return for the five-day event window around the share repurchase announcement for the clean samples was 2.26 % and on day zero it was 1.30 %, with same time periods for all the samples results were 0.93 % and 0.62 % respectively. Also negative abnormal returns were observed ranging from twenty to six days prior the announcement which gives support for the signalling hypothesis. In the intra-industry comparison there were not observed any competitive effect for rival firms and evidence for contagious effect was quite weak as well so conclusion was that positive market reaction from share repurchases is mainly firm-specific. In addition, there were not observed any differences between different industries on the reactions to repurchase announcements.