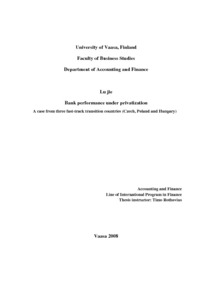 A lot of empirical studies argue that bank privatization has positive effect on bank performance. The purpose of this paper is to go through the bank privatization literature and to test this argument in three fast-track transition countries (Czech,
Poland and Hungary).The empirical results of this paper indicate that privatization does have significantly positive effect on bank profitability and loan portfolio quality improvement, but has slight effect with operating cost efficiency in these countries.
The research uses ordinary regression to examine the relationship between ownership structure change ( the symbol of privatization progress) and annual profitability, operating cost and non performing loans respectively, additionally we use means of
those three performance indicators in CPH countries and put those three indicators together along with the mean of ownership structure changes to test the correlation among them. Overall, the findings support the argument. As china is embarking on
significant bank privatization now, and china shares a lot of sameness with the three fast-track transition countries politically and economically, the researcher hopes this paper can be somehow useful to china’s bank industry.