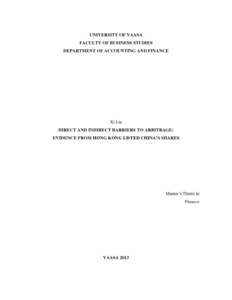 Arbitrage lies in the core of many finance theories. It eliminates any mispricing and brings prices to fundamental values, keeping markets efficient. In reality, however, there exist various barriers to arbitrage that deter potential arbitrageurs from correcting the relative mispricing in a timely manner. While the existence and consequences of some direct barriers, such as capital controls and short-sales restriction, are evident and straightforward, other barriers are less obvious and indirect in nature but with the same effect of discouraging arbitrage activity. This paper investigates the role of various direct and indirect barriers to arbitrage in the persistence of relative mispricing with a sample of shares listed both on Hong Kong Stock Exchange and one of China’s stock exchanges.

Time-series and cross-company fluctuations in price difference of the sample of cross-listed shares are investigated. It is found that the reduction of direct barriers has a significantly negative impact on the aggregate level of pricing difference, and that direct and indirect barriers to arbitrage can explain collectively 54% of the cross-sectional variation in pricing difference. The estimates are significant even after controlling for firm size, listing year and performance. The findings in this paper provide an alternative explanation for China’s foreign share discount, especially for the persistence of relative mispricing. This study also sheds lights on the pricing of noise trader risk argued in Lee, Shleifer & Thaler (1991) but proved otherwise in empirical studies. Specifically, the result confirms the notion that both idiosyncratic and systematic risk matter in arbitrageurs’ positions, particularly when the markets under concern are relatively segmented.