"The Powers of the Weak". Representations of Women's Power in Kenyan Literature 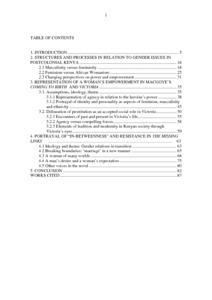 Gender relations in Kenya, including Luo, society have gone through profound changes since the country became independent. Consequently, the inferior images of women in postcolonial literary works are undergoing gradual alterations as well. They are moving from the margin to the centre in literary representations and strengthening their positions in gender relations through their feminine power, resistance and empowerment.

The main object of this research has been to explore how women’s power appears in contemporary Luo literature as a means of cultural representation. I have studied the origins of their power to see to what extent it stems from modernity, from the influence of the Western ways of thinking, and to what extent women rely on traditional practices and customs preserved and transmitted by generations from pre-colonial times to the present.

The study has been divided into two general sections: the first section comprises a short socio-cultural background and structures and processes in society; the second section incorporates analyses of the literary texts and interpretations. In Chapter three two novels of Marjorie Oludhe Macgoye who is a British-Luo writer, have been analysed: Coming to Birth (1986) and Victoria (1993). In Chapter four a male Luo author Tobias Odongo Otieno’s novel The Missing Links (2001) has been examined.

Overall, the findings have indicated that women’s power originates from both the traditional, customary resources and the new opportunities of modernity, imported ways of life. In Macgoye’s novels a greater emphasis is placed on women’s empowerment through education and their personal ability, while in Otieno’s novel a woman’s power is manifested in domestic spheres via her confrontation with masculine values which generate her assertiveness, resistance and inner rebellion.