VISION SYSTEM FOR ONLINE DEFECT-DETECTION. An evaluation of methods for defect-detection for KWH Mirka's abrasives 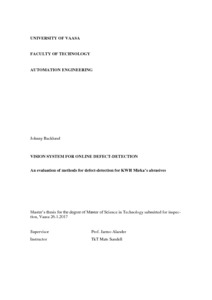 KWH Mirka has machines for punching out disks from their abrasive sheets. The sheets have gone through many processing stages during its fabrication, and as a result they contain different kinds of defects. Sheets have been joined several times with dif-ferent techniques, the grip cloth has been joined, and test pieces have been carved out. These kinds of defects are made on purpose and are usually already marked, but not always. The abrasive roll may also contain unintended defects such as folds or stains.
The goal of this thesis is to develop a complete system, and also evaluate different methods, for detecting defects in Mirkas abrasive sheets. An Omron FZ5 vision system has been installed at the machine and the first goal is to configure this system so that it detects the most common defects. This system should perform according to the re-quirements set by KWH Mirka and the environment at the machine. This part of the work shall also give an idea of the suitability of the Omron-library for this task.
In an attempt to complete the texture processing shortcomings in the Omron-library, another algorithm based on features in frequency space will be tested with Matlab. Fuzzy membership functions are used to compare measured values against values from faultless material.
The result is a complete system for detecting the most common defects, along with an evaluation of some more advanced method’s suitability for defect detection based on the pattern on abrasive sheets. This is all summarized to a recommendation on up-grades if more advanced measurements are to be done in the future.