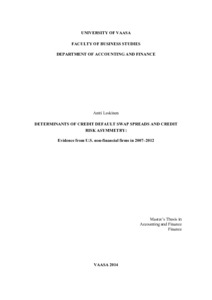 In the empirical part, a sample of 207 credit default swap spreads on U.S. non-financial firms is examined together with eight accounting-based variables and six market-based variables, respectively. The data consists of quarterly observations in 2007–2012, covering both the financial crisis period and the post-crisis recovery period. A linear regression is employed to study the relative performance of accounting-based and market-based models. Moreover, a quantile regression method is conducted to provide evidence on asymmetric effects together with symmetric quantiles test.

A majority of the increasing literature on the relationship between credit risk models and credit default swaps find that accounting and market data should be considered as complements rather than substitutes to one another. Similar to previous studies, the results imply that both accounting- and market-based variables contribute to the firm’s CDS spread. Moreover, the effects of the most essential accounting-based variables, leverage and return on asset, intensify during the financial crisis period, whereas the most influential market-based variables, volatility and equity return, experience the opposite effect.

Finally, the results suggest that there is an increasing survival effect, which occurs as accelerating nonlinear effects of risk determinants within the higher CDS spread firms. The asymmetric effects are also dependent on the prevailing economic conditions, suggesting higher firm-specific asymmetric effects during the recovery period than the financial crisis.