Government Responsiveness to Family Policy in Finland, Germany and Italy - A Comparative Perspective 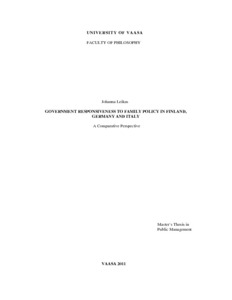 It is not possible to question the importance of family policy: the way how family policy is administered affects greatly our well-being. The more responsive the government is to family needs, the more satisfied are the citizens with public policy. In countries with less responsive family policy, also fertility rates are lower. The matter is not affecting only the personal lives how the family matters are organized, but the whole world economics as well. If there are not enough children and tax payers in proportion to the elderly, it has macro economical effects and the society is not in balance either.

This research studies how responsive are the Finnish, German and Italian governments to family policy. According to most of the welfare state models, they are each belonging to a separate group. In this thesis these countries’ family policies are analyzed with the help of public administration doctrines new public administration and new public service, of which each of the countries is more or less constructed according to the ideal systems. In addition, with the help of the concepts of responsiveness, governmental responsibility and good governance, the topic will be opened up.

This is a qualitative study using comparative approach as a method. With the help of comparison the differences of family policy in the countries are compared. This thesis has a wide range of material which consists of theoretical administrative and public policy literature, as well as of material among social policy, welfare, justice, governance and special family policy literature. In addition, in the empirical part there are used statistics, governmental documents and constitutions for comparing the three countries.

The central findings of the study show that Finland, Germany and Italy are still belonging to separate welfare groups in their responsiveness. The amounts of benefits are highest in Finland, moderate in Germany and lowest in Italy. The Finnish government seems to be most responsive to family policy and also citizens tend to be satisfied with the public support for families. Comparing these countries, fertility rates are also highest in Finland and as well as above the EU average level, which appears to have direct connection with responsive family policy. In many aspects Germany spends half of the amount to families as Finland do. Around one third of German citizens are satisfied with the family policy. Italian government gives in many points the same amount of benefits as Germany, or half of the amount as Germany does. The fertility rates for Italy and Germany stay around the same, being below EU average as well as being countries with one of the lowest fertility rates in the world.