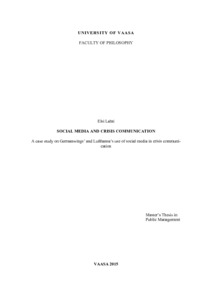 The research methods used in this thesis are qualitative and descriptive. A case study was chosen as a research method to provide an example of how an international organization has used social media, or more specifically Twitter, in its crisis communication. The data for the case study was gathered from The organisation’s Twitter account, consisting of posts made by the organization in the first months of the crisis.

What became evident during the research was that it is crucial for organisations to use social media as a crisis communication tool to communicate effectively. During crises, social media functions as a platform for people to look for and share information, find support and discuss what has happened, for example. Organisations should not only be present in social media but actively participate in conversing with the public. Social media is about interactivity, openness, communities and transparency and organisation are expected to behave in such a way too when in social media. However, traditional media should not be forgotten in crisis communication. Organisations are required to incorporate different channels of communication, which creates new challenges but also opportunities.