Images of Transylvania in the West - A Deconstructive Analysis 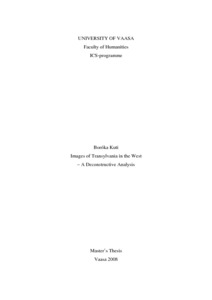 The immediate association of the region of Transylvania with Dracula constitutes one of the oldest cultural stereotypes today. However, with globalisation, mobility and multiculturalism, intercultural encounters have become more frequent whence the prevalence of such frozen images became problematic if not overtly debilitating. The question of identity and image making for cultures has become of great concern today and the issue opens up the contemporary debate on the politics of representation and cultural images.

This study analyses the way the ‘Transylvania-Dracula’ cultural stereotype was created by the gradual de-construction and building-down of its constituent elements. Visualised by the model of culture as an Iceberg, the study asserts that cultural stereotypes are but frozen images built on the solid foundation of a generation of discourses, motivated by the intention of representing the Other as the very other or the opposite of the Self. The extended analysis of the East-West binary discourse exposes the way Western discursive texts consistently used generalizations and alienating labels in reference to Transylvania in particular and the East in general. These representative habits were then easily transferable to film, fiction and travel literature, as proven in the analysis of Bram Stoker’s novel Dracula and its subsequent movie adaptations. The theory of deconstruction together with discourse analysis is indispensable for the understanding of the representation of otherness and image creation. Deconstructive criticism and critical discourse analysis help unveil the authoritative nature of discourses and uncover the oppositional binaries that underpin our thinking, showing how representations of the Other prey on old cultural associations and concepts. This is a reminder of our postmodern condition, that we have only representations from the past to construct our narratives. Moreover, the analyses reveal the constructedness of cultural images - with the implication that this construction necessarily involves restriction, emphasis and omission - and thus prove why images cannot be taken for granted.
Although the study does not manage to overthrow all these tendencies, it does contribute to cultural studies by encouraging critical theorizing and analytical thinking.